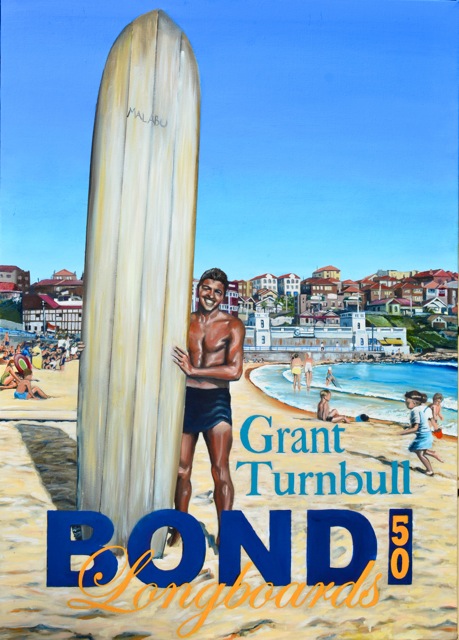 This painting shows Bondi local, Grant Turnbull, posing with the first balsa board to arrive in Australia, in the summer of 1950-51. The skegless board had been surfed by the Duke in Hawaii in the late 40s and was brought to Australia by American actor, Peter Lawford, who starred in the Australian movie ‘Kangaroo’.

Grant left the board with the beach inspectors, who stored it where Beach Hire operated for decades under the promenade, often using it as a rescue board. It is said that the captain of the Bondi Surf Club made off with the board in the early 60s and it has not been seen since.

Grant Turnbull was born in 1929 and has been a member of North Bondi Surf Club since his teens. For many decades he taught swimming and surf skills to kids. He also worked as a ski instructor, both here in NSW and in Austria. Grant was a part time model in his younger days and also worked as a steward for QANTAS. Grant Turnbull still lives in Bondi.