The crews hang at various places. At the tunnel, the second ramp, the first ramp, the rocks near the end of the beach, and at the baths. There are younger kids at the tunnel. They are swollen in numbers because it’s hot and it’s nearly holidays. They’re young and stoked and they haven’t yet acquired specific characteristics like the other groups. Or if they have they’re keeping quiet about it so far.

Bondi gets good in winter. A lot of waves and the crowds are not bad. In summer it’s the most populated bit of beach in the country. From the harsh dawn there are joggers and strollers and sitters and swimmers. There are hundreds of kids that walk out of the wilderness with a board under an arm and a towel in a hand and sunburn cream on a nose. On those summer weekends it’s glary at six o’clock and the sun is hot when it’s an inch above the horizon. The kids pull on their shorts, squint at the good peak that’s formed in the south corner, look around for someone’s wax. Old men do Yoga amongst the rocks. Joggers jog out of the hills and along the concrete promenade. And the surfers hit the peak, and it’s crowded by seven o’clock.

There are a lot of people. They go by one another without recognition. In the water, despite the crowds, there isn’t a fierce competitiveness. There are too many people for that somehow. They withdraw to their own worlds. The simple facts of survival ensure a respect and consideration that is implied mostly, and almost carelessly.

Brad Mayes is one of a lot of good surfers at Bondi. He hangs mostly at the second ramp. His surfing shows traces of Ted Spencer, perhaps the littlest bit of Nat, and it’s probably representative of the strongest group at Bondi. There are influences from the Wilderness community at Yamba and the characteristics aren’t any sort of turn or cutback. They are more basic versatility and adaptability. The waves they ride have sorted that out. It’s good surfing and Bondi surfers handle any place pretty well. They formed a club called East Coast last winter. One of the reasons was that they’d be able to take the young kids away on trips. They have not done that yet, but they’ve won a few contests and they’ve had a split in the ranks. The Fords pulled out of the club because they didn’t think that they were getting enough out of it. They’re called the Reformers. They didn’t get all that stoked about the social turns and the kegs that blew some of the club bread. And you don’t make it with the Fords if you’ve got a girlfriend. 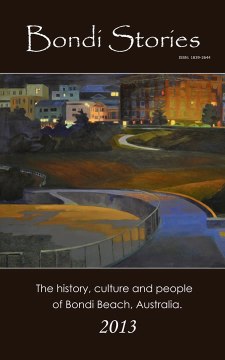 There are four Ford brothers and five or so others that are pretty tight. Most weekends they hit Narrabeen. It stands out immediately in the quick arm swinging turn cutback. When they’re at Bondi they hang at the baths. And sometimes they wear coloured singlets while they’re surfing. When they wore them at Angourie it didn’t show too much insight into the vibe of the place. They go northside in a white Kombi that’s got McCoy stickers and ‘Northie forever’ written on it. They look alike and they surf alike and they take some of the young kids places that they wouldn’t otherwise get to go. It’s three or four hundred yards from the second ramp to the Baths. Clashes at Bondi have their own restrained sort of style.

The Fords ride McCoys with the rest of Narrabeen. Brad just bought a chined Hayden from Spider and Garry, at Robert Conneeley’s surf shop. For the moment there’s no one shop that’s the fashionable thing. There are a lot of backyard boards and some of them aren’t very good, but no one seems to care too much. There is a sprinkling of Shanes, Astro Boy rides one, and Wayne Williams rides a board he made himself. Young Brock, who’s the artist of the second ramp, rides a Wilderness. Naturally.

Smaller groups of surfers gather at spots along the wall and on the sloping grass above the beach. It’s not too different to any other beach. Except, Bondi has its own brand of person and surfer. He’s a product of the density of population. There are so many kids who live within ten minutes of the beach. To get along, they have to be resourceful, and they have their own kind of detached consideration. And when you watch the surfers in the water you realise how good they are. The locally grown product of the most concrete metropolitan beach in the country is pretty hot. They get more waves than most people realise. As many as anyone who consistently surfs a home beach. They know its mood and the hour when it’s likely to be good. In winter they’re happy to hang at home. The water south is cold, and for short weekend trips, when they go, it’s south. They haven’t preached the Southern Trip and so far it’s untouched by the media. Some of them think that the southside generally has had a bad time from the magazines. That it hasn’t got the recognition that it deserves. Others sense that that’s the best thing about it.

Bondi’s got nothing much going for it. It’s a product of the worst absence of environmental planning in history. It’s garlanded by sewerage outlets to the north and to the south, and every time the rain tries to wash the beach into the sea the Council get their bulldozer out and fixes things up. If they left it alone, the bank in the south corner would probably be much better, much more.

Over population makes the summer weekends nightmares. They are gross in the worst possible way. The kids recognise it, dislike it, and put up with it. And they carry this discipline into their surfing. Somehow, out of it, with the normal number of casualties, has come a group of surfers with an extraordinary basic strength. As individuals, their surfing is balanced and straight. As a group they’re not overbearing. Bondi’s got nothing much going for it but its kids.